The Face to Path Relationship

Most of us curve the ball unintentionally to much and too often.  And yet not enough of us can read ball flight and use it to diagnose our swing errors.

The curve on a golf ball generally comes from the face to path relationship.  For this discussion we will assume center contact for all shots.

On a 7 iron, the face angle represents about 75% of the influence on the flight of the ball.  The other 25% is path.  So getting the face of the club square at impact is a much higher priority than perfecting path.  On a driver, the face influence is even stronger.

Many slicers actually don’t cut across the ball with an outside to in path – instead, their path is reasonably straight while they simply leave the clubface open through impact.  This could be a lack of torque applied by the wrists and forearms, or it could be more sinister; a poor handle path. 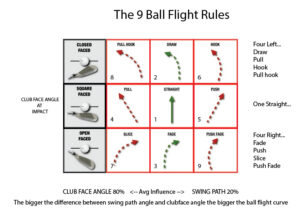 If your ball starts straight or to the left and then slices (right hander), you are probably swinging out to in.  If your slice starts right of the target immediately, your path is probably ok and your issue is an open clubface.

Better players will sometimes get into the funk of ‘pull hooking’ or ‘smother hooking’ shots.  They tend to think they are swinging out to in since the ball is starting left.  So they try to swing more in to out and end up in a vicious cycle where they start to pull hook worse.

These players have not learned yet that the face of the club is so influential on the curve of the ball.  Instead, they should figure out why the clubface is getting so closed through impact.  This could be any number of things, like poor alignment of the face at address, poor grip, or a faulty pivot.

In a perfect world, we would love to have a straight path, straight clubface, and center strikes every time (although some would argue a little intentional curve at times is best practice).  But realistically, we just need the path of the club to be around +/-4 degrees or so, with the face of the club pointed as close to the target as possible at impact with only small deviations of 1-3 degrees.

Face control and closure rate therefore become paramount – and the role of the hands and forearms is actually only one contributing factor.