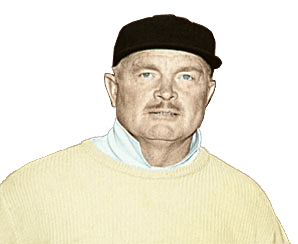 March 7, 2018Steve Pratt
With legendary golf instructor Mike Austin, it was sometimes difficult to sort out the truth in his many epic stories.  That’s why it’s always valuable to hear anecdotes from people who witnessed some of his feats.
A subscriber sent in this gem yesterday and I just had to share:

‘In the 1970’s and early to mid 80’s I hung out at Studio City driving range.  It was a happening place, with many celebs.  People would go and spend two, three hours there, just hitting, or talking with friends, or just watching the many pros teaching.

Austin was there.  Roger Dunn was there.  A real old,  old, old timer was there,  Joe Norwood (95 I believe, at the time).  Could not see well,  stooped over, but by looking at the ball when you hit it he could describe where it went,  high or low, solid or not.  And Mike, well he was his usual acerbic, witty, yelling and screaming,  Mike.

Anyway, I play golf every other Wednesday with my first attorney boss, who is now 82, has survived three cancer surgeries, and takes a real whack at the ball. We play Hansen Dam, good course for high 80’s to high 90’s shooters.  So after a round we always go into the restaurant bar area.

A couple months ago we went in there about 3 PM and there were a couple of Black guys drinking and eating at a table near us in the bar area.  Being the age I am, coming from back east, which had busing in the 1950’s,  having been in the Army for 2 years,  I was always around minorities, no big deal.

We all started talking (the older guy said he is 85, used to play football, and recently had some serious back surgery).  I mentioned hitting at Studio City where MA was, and he laughed and laughed.  Said he was a good athlete back then, not just in football but in golf, and Mike and he used to hang out some.  In fact, he said, we played Hansen Dam several times.

He asked me if I knew about MA’s famous length and of course I did, do.  He then says, let me tell you.

Hole one out here, he said,  MA teed up and hit his drive on a fly over the green.  (1st hole at Hansen Dam is 385 yards!)  He then laughed some more, said Mike hated putting and the short game.  He said he hit 100 yards short of the green, hit a good pitch and sunk a putt for birdie. Mike hit onto the green and three putted for a bogey.

On the 10th hole (don’t know if you know Hansen-this is a downhill sharply uphill to the green hole, not too long but the uphill part would catch your ball and it would stop dead.  So he says Mike hit three wood, flew the green and landed in the hillside behind the green.  (10th hole is 310 yards)

We just had a good old time recollecting all the stories, as older guys tend to do at some point in their lives.’

Authors Note:  Studio City and Hansen Dam are both in the San Fernando Valley section of Los Angeles, about 15 minutes apart.  Studio city, where Mike Austin taught, was a small but well maintained par 3 that played around the driving range in a loop.  It has since been renamed to Weddington Golf and Tennis after the street it’s on.  Hansen Dam is near Pacoima, and is a fairly benign muni track.

Do you have a good Mike Austin story?  Unweaving what is fact or fiction is like trying to undo an enormous complex knot.  Email it to me at Steve@hititlonger.com.